Read all about it: South Park mocks Steve Irwin's death 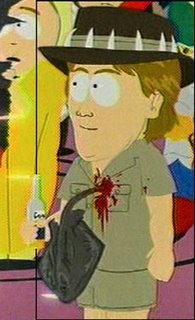 Personally, I think it's hilarious. And I love the fact that the ray is still attached.

I was in a hotel room in Vienna this week when I saw the CNN footage of Iraqi snipers shooting U.S. military personnel and I knew it was a subject that I wanted to blog about as soon as I got back home. When I saw the video, several thoughts came to mind. First, I thought it was about time that the mainstream news media finally reported on the true face of war. War is not pretty, people get killed or maimed and showing just how vulnerable American troops are when they are sent in to any war is what the American public needs to see. My next thought was, "Shocking? How can CNN think this is shocking? Hell, all that the insurgents are doing is the same thing that American soldiers do. How is the "enemy" using their snipers any different from us using our snipers? There was even a retired military officer saying the exact same thing - that the insurgents are using snipers because it works and we know it works because we use snipers as well. Plus, our smart bombs that we used extensively at the start of the war are essentially snipers with huge bullets - the atack comes from an unseen enemy. Why would anyone be shocked by this footage?

Of course, no one with any intelligence that cares to think about the consequences of Bush's illegal war on Iraq would think that this footage is shocking. Which is why its no surprise that CNN's decision to air the footage has been widely condemned by Republican leaders and conservative talk show hosts (see news story), which is exactly what I found when I got back home today from Europe.

On a side note, now that I'm back, I've downloaded the over 1,800 photos that I took during my vacation to the Czech Republic, Slovakia, and Austria from my camera to my computer and I'll be going through them and uploading the best to Flickr and blogging about the trip later. Stay tuned!
Posted by Ray at 3:32 PM No comments:

Email ThisBlogThis!Share to TwitterShare to FacebookShare to Pinterest
Tags: politics

Teen Mishap (IMG_3629)
Originally uploaded by orayzio.
So I'm driving home through the neighborhood and this scene caught my eye. I rushed home, grabbed my camera and came back for this photo set.

According to a friend at the scene, two 16-year old kids decided to make a run to 7/11 for a Slurpee. They were on their way back, heading down this alley (probably too fast) when their right front tire caught the anchoring cable for the telephone pole. The car rode straight up the cable and got stuck there. The kid sitting down was the driver.

Incidentally, I was a member of the South Park Action Council when the mural on the wall was painted. SPAC sponsored the mural.
Posted by Ray at 2:13 PM No comments: