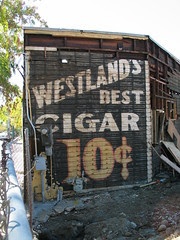 Snippy's Tavern Wall (IMG_5580)
Originally uploaded by orayzio.
Snippy's was an old dive bar across the street from our old house in South Park. It was purchased about a year or so ago by Sam Chammas, the same guy that owns the Whistle Stop. It had been closed pretty much since the purchase and the rumour was that the place was going to be remodeled and reopened. And, that's what appeared to be going on for the last few weeks.

Then, about a week ago, they tore all the stucco off the building and exposed this great old cigar ad. As soon as I saw it, I knew I needed a picture. And, it turns out that taking its picture was a good idea... today when I walked by, the entire building had been torn down.

I imagine that they're planning to rebuild something on that spot, but it's really too bad that this piece of Americana is gone.
Posted by Ray at 3:50 PM No comments: