Why the Hell Hasn't This Woman Been Sent Back to Mexico?

I live in San Diego and I like to read the newspaper, so I subscribe to the only daily newspaper available in San Diego, the Orange County edition of the Los Angeles Time. I receive delivery Friday through Sunday and a story from Friday's edition caught my eye. Here's an excerpt:

An illegal immigrant couple with six children were already living in poverty. Then the quadruplets arrived. They're still in a daze.

This story has everything: illegal immigration, drug smuggling, "trying for a boy" as a reason to have more children than you can afford, blind-faith in religion, and your tax dollars at work. Go ahead and read 6 + 4 = 1 Tenuous Existence and then come back for my comments... I'll wait.

This woman has spent 22 years in this country illegally and there is nothing in the article to indicate that she has ever been deported, that there has ever been any action by any government agency to ever try to deport her, and there seems to be no action to deport her now. Instead, she is allowed to live here illegally.

To add insult to injury, this woman admits to taking fertility drugs that were smuggled into this country from Mexico. Did she have a prescription for these drugs? Is our government investigating this illegal drug smuggling and illegal drug use?

Is this article supposed to make me feel bad for her? I don't. She and her husband already had two teenage daughters (not counting her husband's children with other women), were living beyond their means, when they decided to have more children by illegal means in a country that they were illegally living in. She even had her tubal ligation reversed so that she could try for a boy (her husband is quoted as saying, "I wanted a son because I didn't have one.")

Oh sure, she tried birth control, but gave that up "when it made her nauseated". And then she's "stunned" to find out that she was pregnant with quadruplets? The title of the article should have been "fertility drug abuse + failure to use birth control = consequences for stupid people".

I'm sorry. Maybe I'm being too harsh. Maybe she's not stupid, maybe she and her husband are just selfish. After all, she's one of 10 siblings herself. Never mind that they can't afford any of their children.

Or am I looking at this wrong? After all, "God never gives us more than we can handle" (paraphrased from I Corinthians 10:13). Maybe this is a blessing in disguise.


Lest there be any doubt, I am an Athiest; I don't believe in any god and I surely don't believe that The Bible is anything other than a collection of myths that, unfortunately, have had far too much influence on the world. Personally, I prefer The Boomer Bible.
Posted by Ray at 3:30 PM No comments: 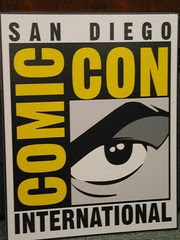 IMG_3336
Originally uploaded by orayzio.
I spent 4 days at Comic-Con this year and I've got the photos to prove it.

My favorite sessions (in no particular order) were the screening of "This Film Is Not Yet Rated" (and the Q&A with the filmmakers after it), the Superman Returns blooper reel at the Bryan Singer session, Quentin Tarrantino and Robert Rodriguez discussing their Grind House double feature, the Daniel Clowes session and the Clerks II screening (with a Q&A with Kevin Smith after it).

Actually, the Clerks II screening was separate from Comic-Con, but since I found out about it at the View Askew booth and since it was populated heavily by Comic-Con attendees, it's related.

Bush is Holier Than Thou

As he issued his first veto of his presidency, Bush also issued the following statement:

Yet we must also remember that embryonic stem cells come from human embryos that are destroyed for their cells. Each of these human embryos is a unique human life with inherent dignity and matchless value.

Yes, embryonic stem cells come from human embryos, but these human embryos are at the blastocyst stage. For those of you who missed or forgot human biology, a blastocyst is a very small collection of cells that have not yet been implanted in the uterus and might never be implanted in the uterus and might never grow to become a baby. To call a blastocyst a "unique human life with inherent dignity and matchless value" is to call an acorn a tree.

Bush likes to frame his issues in terms of moral values, but they're his personal moral values and not the moral values of the majority of Americans and they're certainly not my moral values.
Posted by Ray at 1:21 PM 1 comment:

I was driving along Sunset Blvd in Hollywood the other day when I passed by a building that proclaimed itself, "Museum of Psychiatry: Industry of Death". Only later, after someone forwarded me an email solicitation for a free "Personality Test", did I realize the building was a new Scientology museum. Los Angeles CityBeat reported on this new "museum" in an article earlier this year, shortly after it opened.

If you're an idiot or just curious (hopefully, my readers are the latter), you can read the press release from the Citizens Commission on Human Rights.
Posted by Ray at 4:22 PM 2 comments:

Email ThisBlogThis!Share to TwitterShare to FacebookShare to Pinterest
Tags: religion 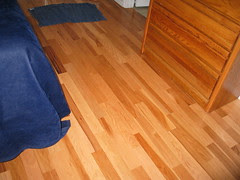 New Bedroom Floor (IMG_3162)
Originally uploaded by orayzio.
We are in the process of having our carpeting and most of our tile replaced throughout the house with new hardwood floors.

The first phase of the project is complete and our master bedroom has a new wood floor.

The second phase of the project is demolition of the carpet and tile and nailing down of the new hardwood floors.

The third phase is final sanding and finishing.

We have finished the second phase and are waiting for the third phase to begin in 3 weeks.

I've posted photos of the process to my Flick site and will continue to add new photos as the project progresses.
Posted by Ray at 5:46 PM No comments: