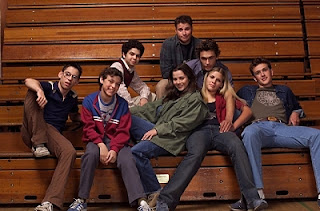 Kara and I caught two movies at the local all-digital projection cinema this weekend so I thought I would post my thoughts on the movies we've seen in the last year.

First up is the most recent movie, the one we saw this afternoon: Knocked Up. We had both been looking forward to seeing this and it did not disappoint. It was great to see some of the freaks and geeks back together again and Judd Apatow is really good at writing dialog and scenes that look and sound like people we know. I got the feeling, though, that many in the audience didn't quite get "it" with a few of the scenes that Kara and I were loudly laughing about. Maybe it's generational or maybe we're just more in tune with the movie-fan subculture.

Spoiler Alert: The following may contain spoilers, especially if you haven't seen Little Children - read at your own risk

Yesterday, we saw Pirates 3. I liked the first pirates OK but Kara really liked it. The second one... we both thought it sucked. The 3rd one was much better than the 2nd, but that's faint praise. I didn't remember any of the plot from the 2nd installment so I was completely lost for the first hour of this one. The battle scenes (which, is really 90% of the movie) had no excitement to them. The only truly interesting thing in the movie were the scenes with multiple Johnny Depp and even those scenes got tired after a few times. If you haven't seen the second movie, don't bother with the third. Just wait until next year when they show it non-stop on HBO.

Between the two big-screen flicks this weekend, we watched Little Children on DVD. It was an interesting movie, worth the rental, but I don't quite get all the critical acclaim heaped on it. Jackie Earle Haley was great, but I think he got nominated for best supporting actor half because he did a great acting job in both this and All the King's Men and half because his character castrated himself with a butcher knife (see Mel Gibson's career for reference).

On a side note, I remembered Jackie Earle Haley as a young adult actor in the great coming-of-age movie from 1979, Breaking Away. If you haven't seen Breaking Away, go out and rent it.

Getting back to movies we've seen (past tense), Spider-Man 3 was wonderful. Sure, it's not as good as the second one, but few movies are that good. It's still Sam Raimi, it's still Bruce, and it's still Spider-Man. After the Fantastic Four, Spider-Man was my favorite comic book character growing up and I always loved the marvel team-ups where there were multiple heroes and multiple villains. If I had one complaint, it was that the movie wasn't long enough; there was so many characters and plot points and it would definitely benefit from a LOTR-style extended version (just like the first two LOTR, though not the third which was already too long).

Going back a few more weeks, I thought Grindhouse was greatly entertaining (more so for RR's Planet Terror than QT's Death Proof), Blades of Glory was, well, another fun if mindless Will Ferrell film and 300 was very good. Speaking of 300, I borrowed the Troy DVD many moons ago from my friend Jim and finally got around to watching it just this past week; it was OK, but 300 was so much better that I think I liked Troy less for having seen 300 first.

Taking a half-step backwards, I wanted to see Stranger Than Fiction last year when it was in theatres but we never got around to it until it came out on DVD. If I had seen it last year, it would have been one of my favorite films of last year. All I can say now is that it was excellent and I highly recommend it. Also, in that same half-step but a little to the side, I miss GOB and Arrested Development. Arrested Development was one of the great TV series and it's just too bad that it couldn't find an audience. Oh, and if you haven't figured out the half-step, it's the two Wills: Will Arnett and Will Ferrell.

Getting back to the movie theatre crawl, Hot Fuzz was OK (Shaun of the Dead was soo much better), Zodiac was excellent, as was Breach. Pan's Labyrinth was also excellent.

If I include DVD watching, Blood Diamonds was excellent while Music and Lyrics By was barely tolerable (we were looking for something light and Drew Barrymore usually delivers - not so much for this one though). Also, we didn't see Cars until this year on DVD and it's the first Pixar film that was not only not excellent, it pretty much just plain sucked. But, after seeing Cars and thinking about just how sad a commentary it is to note that the United States has become a nation of NASCAR and wrestling-loving red-state-necks, made me appreciate just how close we've come to the society visualized by Mike Judge in his under-rated and underseen Idiocracy. (Kara and her mom hated Idiocracy, but I enjoyed it and it gave me my favorite catch-phrase of the year, "Ow, my balls!".)

Going back much farther and into last year, I liked Children of Men, although I thought the cinematography was just annoying and not visionary (as some critics labelled it). And in the battle of Victorian magicians, The Prestige was a much, much, much better movie than The Illusionist, although I will say that I did enjoy both movies. The Prestige would have been perfect except that I was sorely disappointed by the ending. Not enough to not recommend it highly and not enough to spoil it for you.