I survived (yet) another Comic-Com 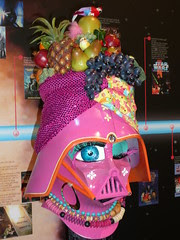 Carmen Mirandarth (P1000120)
Originally uploaded by orayzio
My Comic-Con 2007 photoset can be perused here or viewed as a slideshow.

For the first time in Comic-Con history, all tickets for all 4 days were completely sold-out... and you could tell this by trying to navigate the exhibit hall. Preview Night is supposed to be the slow night, but I swear it was at least as crowded as Saturday last year. And actually, Saturday this year seemed to be the least crowded day of all the days that I attended. I was there on Wednesday night through Saturday night, but I skipped out on Sunday.

The highlights for me were:


Oh, and all of the pictures were taken with my new camera. It took me awhile to figure out the best setting for pictures at the various sessions (I settled on the "High Sensitivity" scene mode with the higher level of jitter reduction) and when you add in the 10x optical zoom, I'm pretty happy with those photos. But, I didn't like the fuzziness and out-of-focus shots on some of the more up-close photos. But, I would recommend the camera as a very handy and capable, slip-it-in-your-pocket-and-go camera.
Posted by Ray at 7:21 PM

Email ThisBlogThis!Share to TwitterShare to FacebookShare to Pinterest
Tags: Comic-Con, My Photos, photography