Comic-con has come and gone 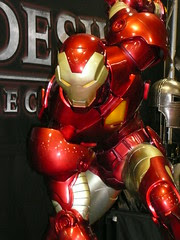 Wednesday through Friday seemed busier on the dealer floor than did Saturday and Sunday was much slower than last year. It was absolutely crazy on Wednesday.

Last year, I sat in Hall H all day for two days. This year, I only sat through Kevin Smith on Friday night and Heroes and Lost on Saturday.

Kevin Smith's panel was OK, but not as funny as in past years. I love Seth Rogen, but I hope he has more than one note in him (stoner dude).

Seeing the first episode of Heroes for the new season two months early was pretty cool. I just with Kara had been there to see it with me. Now I have to keep all these secrets!

The Lost panel would have sucked, except for the funny gifts for the people that came up and asked questions. They didn't give anything away about the next season, so it seemed like a waste of time.

The line for the big rooms — except for Hall H — were just ridiculous. I lined up 90 minutes before Dexter and still missed the first 10 minutes. I'm also pissed that I lined up 90 minues before the Battlestar Galactica panel and still didn't get into the room, plus I was only 20 people from the front of the line when they announced that no one else was getting in to BSG. I should have stayed in Hall H to see Terminator Salvation.

Triumph insults Comic-Con (P1020586)
taken by me
The TV Funhouse panel was hilarious and it was great fun being insulted by Triumph (Robert Smigel). Last year, the funniest panel was the Sarah Silverman Show, but I skipped out on Sarah this year....

Oh, and of course, I took pictures at Comic-Con and posted them here. I took a lot less photos this year and only a few with a scantily-clad female, but I hope you enjoy them nonetheless.
Posted by Ray at 5:47 PM